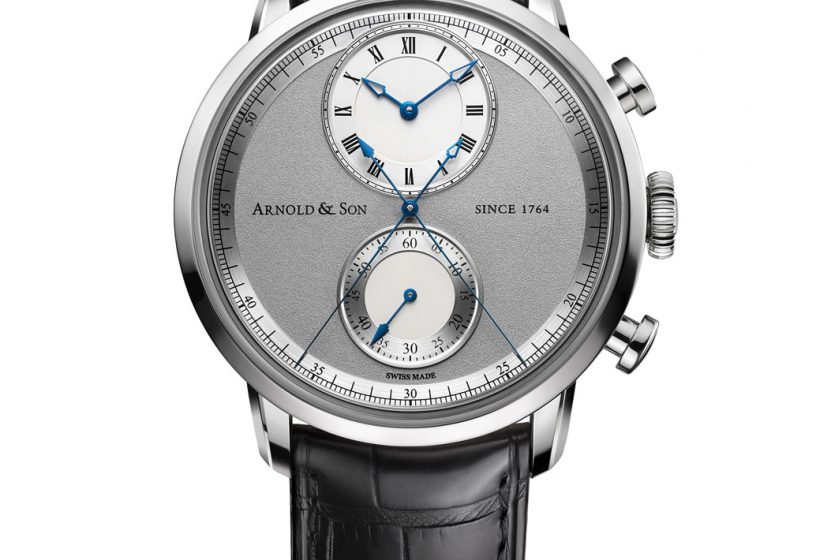 At 12 o’clock is a day/night indicator for the GMT time and time, using matching skeletonized and stuffed hands to tell them apart. The bottom half of this index is darkened, which assists the visual representation of the “night” portion of this disc. I do want the Arnold & Son logo had been found elsewhere however, as its place interrupting the moments track at 12 o’clock could make exact time-setting difficult. Another niggling difficulty I found was that the next hand counterweight closely emulates the look of the house time palms, which may occasionally cause a moment of confusion once you glance down and see three hands pointing towards the dial. In an ideal world, I’d have loved to see the minute hands on each dial stretched only a tad further to properly reach the minute track, and the hour palms shortened a tad to not overlap the hour markers, but this is a minor aesthetic qualm that doesn’t affect utility.On the opposite side of this Arnold & Son DBG Skeleton, the bottom plate of this manufacture caliber A&S1309 is revealed. The movement is made from nickel silver (also known as German silver or Maillechort, an alloy of aluminum, nickel and zinc) that has been rhodium-plated and decorated using C?tes de Genève. The wheels are satin-finished and provide a contrasting three dimensional texture to the bottom plate, and involving the chamfered edges of these bridges, the gold gear train could be seen. The movement is hand wound of course, which contributes to its thinness at a mere 3.9mm. It includes 42 stones and offers a 40 hour power reserve while the twin balances oscillate at 21,600vph, or 3Hz. That is undoubtedly a highly elegant motion, but in contrast to the depth of detail given by this skeletonized dial, the reverse side of this movement almost feels like a letdown.

Adding to the line of timepieces equipped with a dead-beat seconds mechanism, Arnold & Son will present the CTB at Baselworld 2014, which combines both a chronograph and a dead seconds.

At Baselworld 2014 Arnold & Son will officially unveil Chronograph True-Beat (CTB), the world’s first chronograph combined with a dead seconds mechanism. Both the elapsed seconds hand of the chronograph and the dead-beat seconds are co-axial in the centre of the dial. The dead-seconds runs continuously, functioning as the constant seconds, while the chronograph can be started on demand. The sub-dial at six is the 60 minute counter, while the time is displayed in the sub-dial at 12 o’clock, set against a grained grey dial. 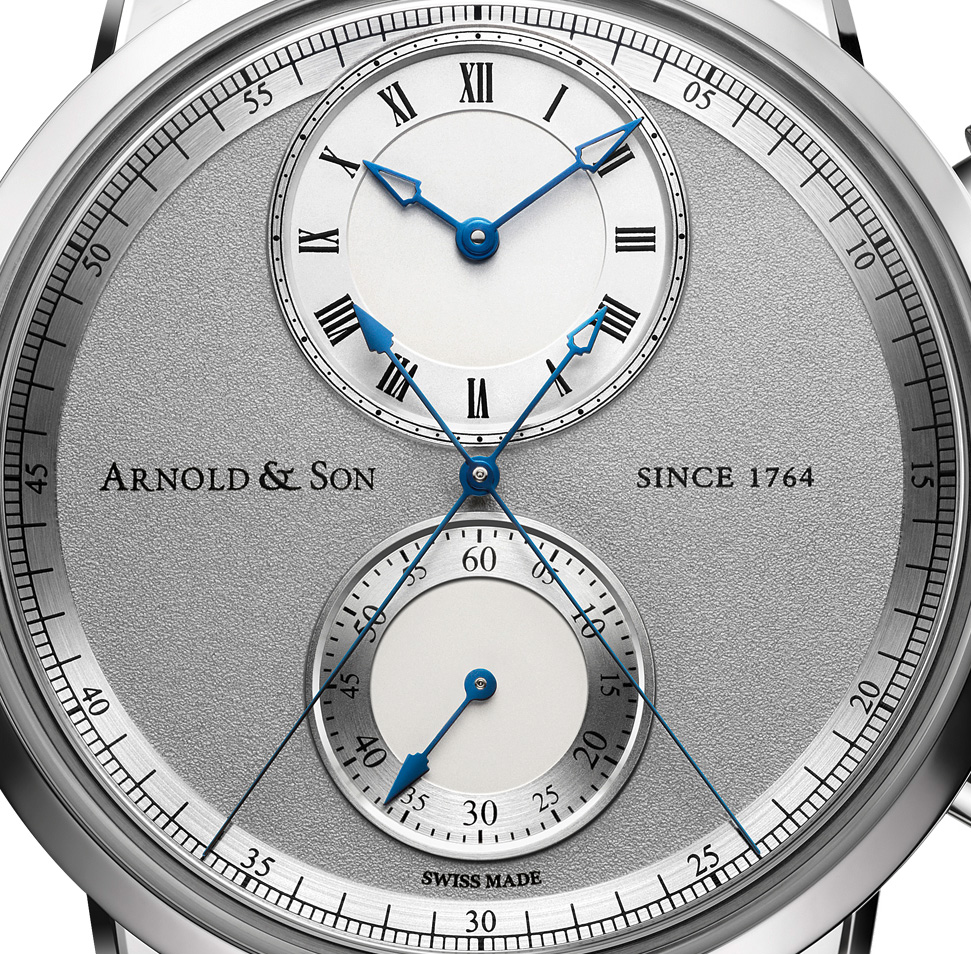 Automatic with a 50 hour power reserve, the A&S7103 movement was developed by movement specialist La Joux-Perret, the sister company of Arnold & Son. This is yet another calibre equipped with a dead seconds mechanism, which has practically become a hallmark of the brand. Also to be launched at Baselworld is the DSTB, which has an exposed dead seconds mechanism on the dial. 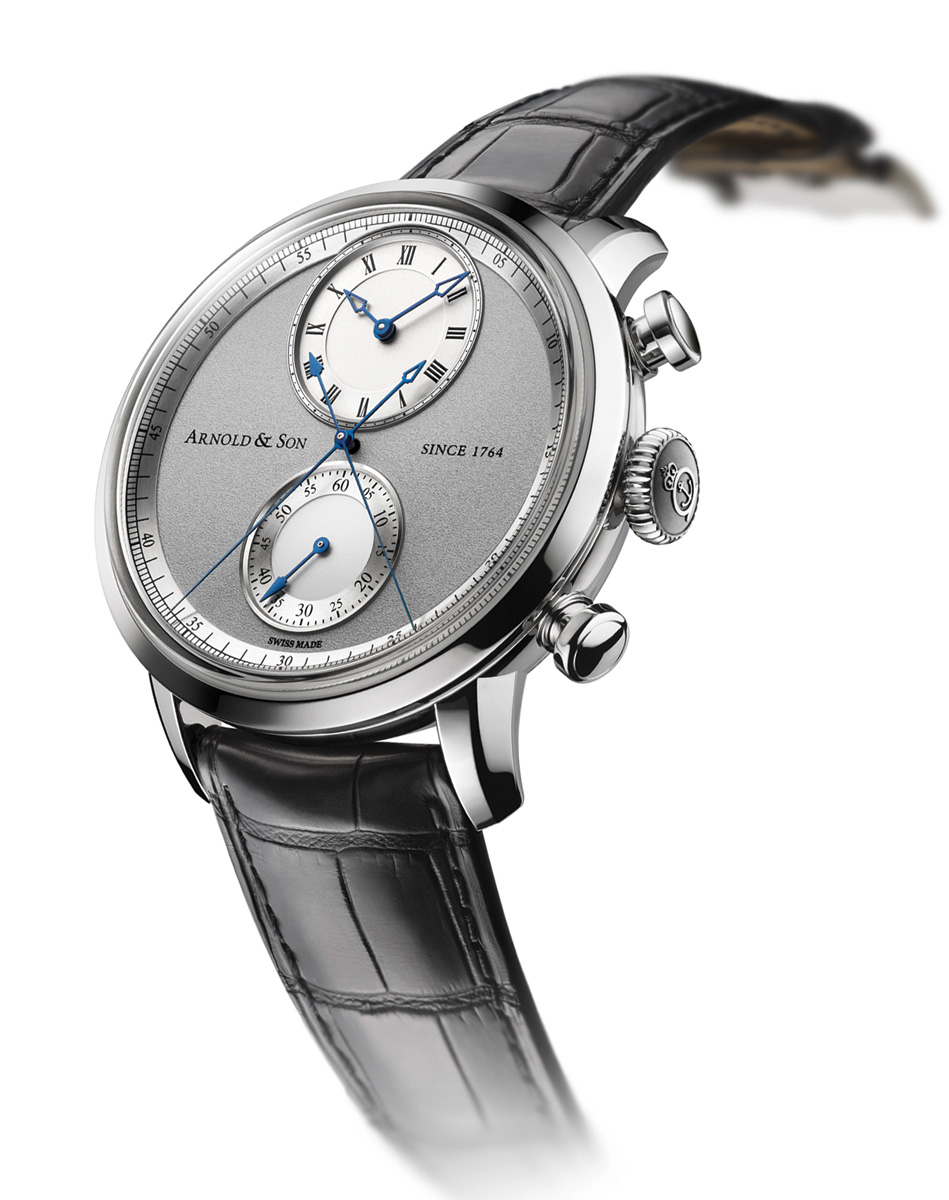